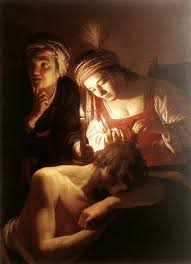 I believe I am able to copy this material and use without permission according to the link. This can apply to marrying and unbeliever or the wrong believer.

iii. It isn’t because those who are not Christians are not lovable – they are sometimes more lovable than believers. It is not because they aren’t good enough, or worthy of our love, or that they are somehow inherently incapable of being a good marriage partner. It is simply because to be a Christian means Jesus Christ is the most important thing in your life; and when a Christian and a non-Christian get together, you have two people who disagree on the most important things in life.

vii. God did use Samson mightily; but God used Samson despite his sin, not because of it. It is fair to suppose that God may have used Samson in a far greater way if he made himself a clean vessel according to the principle of 2 Timothy 2:20-21.

But his father and mother did not know that it was of the Lord; that He was seeking an occasion to move against the Philistines. For at that time the Philistines had dominion over Israel.

So Samson went down to Timnah with his father and mother, and came to the vineyards of Timnah. Now to his surprise, a young lion came roaring against him. And the Spirit of the Lord came mightily upon him, and he tore the lion apart as one would have torn apart a young goat, though he had nothing in his hand. But he did not tell his father or his mother what he had done. Then he went down and talked with the woman; and she pleased Samson well. After some time, when he returned to get her, he turned aside to see the carcass of the lion. And behold, a swarm of bees and honey were in the carcass of the lion. He took some of it in his hands and went along, eating. When he came to his father and mother, he gave some to them, and they also ate. But he did not tell them that he had taken the honey out of the carcass of the lion.

iii. In the same way, Samson shared the sweetness of his victory over the lion with others. Spurgeon pointed out that this is, by analogy, a pattern for the way we should share the gospel.

So his father went down to the woman. And Samson gave a feast there, for young men used to do so. And it happened, when they saw him, that they brought thirty companions to be with him.

Then Samson said to them, “Let me pose a riddle to you. If you can correctly solve and explain it to me within the seven days of the feast, then I will give you thirty linen garments and thirty changes of clothing. But if you cannot explain it to me, then you shall give me thirty linen garments and thirty changes of clothing.” And they said to him, “Pose your riddle, that we may hear it.” So he said to them: “Out of the eater came something to eat, and out of the strong came something sweet.” Now for three days they could not explain the riddle.

But it came to pass on the seventh day that they said to Samson’s wife, “Entice your husband, that he may explain the riddle to us, or else we will burn you and your father’s house with fire. Have you invited us in order to take what is ours? Is that not so?” Then Samson’s wife wept on him, and said, “You only hate me! You do not love me! You have posed a riddle to the sons of my people, but you have not explained it to me.” And he said to her, “Look, I have not explained it to my father or my mother; so should I explain it to you?” Now she had wept on him the seven days while their feast lasted. And it happened on the seventh day that he told her, because she pressed him so much. Then she explained the riddle to the sons of her people. So the men of the city said to him on the seventh day before the sun went down: “What is sweeter than honey? And what is stronger than a lion?” And he said to them: “If you had not plowed with my heifer, You would not have solved my riddle!”

Then the Spirit of the Lord came upon him mightily, and he went down to Ashkelon and killed thirty of their men, took their apparel, and gave the changes of clothing to those who had explained the riddle. So his anger was aroused, and he went back up to his father’s house. And Samson’s wife was given to his companion, who had been his best man.

©2013 David Guzik – No distribution beyond personal use without permission